The Outstanding Achievement Volunteering Award is selected from the volunteer award nominations by the Portsmouth Inspiring Volunteer Awards judging panel.  This is the first year that this award has been given and the panel chose an individual who they believe has shown individual excellence in achievement and who has worked tirelessly ‘behind the scenes’ to improve the vital services provided by a Portsmouth charity. 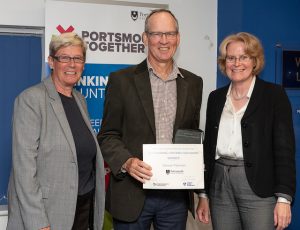 The winner of the outstanding contribution award

Below is part of the the nomination received in relation to Duncan, who was nominated in the Trustee category.

“Duncan has had what he describes as a “somewhat eclectic career” including chartered accountancy, software and lecturing at the London School of Economics and the University of Portsmouth.  He has also held senior positons in financial institutions before becoming the CEO of an international software house.  To be honest, I think Duncan’s breadth and depth of experience would be invaluable to any charity and I feel extremely fortunate that he decided to volunteer with PARCS.

Throughout his years volunteering with PARCS, Duncan has given considerable thought, time and energy to the work of the charity.  I have heard him say that the time he has spent with PARCS has been some of the most impactful and meaningful work he has ever done.  I think this is partly because he takes his role and duties extremely seriously.   Duncan is that rare mix of humble and wise.  He has the wisdom to see the whole picture, to listen to opposing views, to reach for the ideal whilst accepting what is realistically possible.  He is also humble enough to know that he does not have all of the answers and determined enough not to accept second best for survivors of abuse and their families.

I would like to give you an example that will hopefully encapsulate Duncan’s work and qualities. Over more years than I care to remember PARCS have been seeking a new home. The much loved building that we have occupied for many years is no longer fit for purpose.  The plan to move has involved much financial and strategic planning, a lengthy search (over a number of years) which included visiting and rejecting a number of premises, attendance at various stakeholder meetings, additional training, emergency repairs to our existing building, applying for a loan and organising several surveys. A few weeks ago we received the keys to our new home!

Without Duncan’s steadfast support and expertise, we would not have got to this stage and I hate to think how much his time and expertise would have cost PARCS if he was acting as a consultant.   He has attended numerous meetings to represent PARCS, undertaken additional training, organised surveys and translated their findings, helped draw up financial plans, visited many, many properties, attended strategy days and transported furniture to our new abode.”