Special Thank You Day for Volunteers 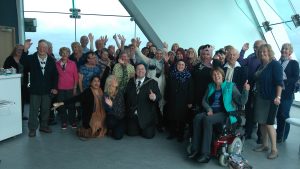 Fifty volunteers who support the Independence and Wellbeing team at Portsmouth City Council were celebrated in style at an afternoon tea attended by the Deputy Lord Mayor on Thursday 7th September 2017.  They enjoyed their tea while appreciating the clear views over the Solent from Deck 2 of the Emirates Spinnaker Tower.

The event at Emirates Spinnaker Tower was to thank some of the dedicated volunteers who help support vulnerable adults in maintaining their health and wellbeing, improving their quality of life, and enabling them to continue living independently in their own homes for longer.

Deputy Lord Mayor, Cllr Lee Mason praised the volunteers and presented them with certificates in recognition of their contribution.  He said that the work they do plays a fundamental role in helping some of the older or more vulnerable Portsmouth residents.  The team wouldn’t be able to achieve what they do without the volunteers’ help.  He was happy to add that the people they support are very grateful for their time.

Our volunteers also received a thank you speech from Angela Dryer, Deputy Director of Adult Services at Portsmouth City Council.