Young Volunteer of the Year 2018

This award was supported by IBM UK

This award was for individuals aged 21 and under who have made a positive impact on their community through volunteering.

We would like to thank IBM for their continued support for the Portsmouth Inspiring Volunteer Awards.  IBM have supported the awards since they started in 2015.

Ali Zella Slater, North Harbour Community Programme Manager, “IBM is delighted and very proud to be supporting the Portsmouth Inspiring Volunteer Awards. This is a wonderful event to celebrate the work of the amazing people in our city who work tirelessly for others in all areas of our community. They help to make a real impact and difference to the lives of others with their dedication, time and enthusiasm. Thank you.” 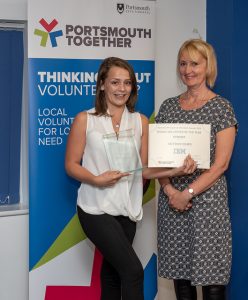 Saffron first came to VOS as a health and social care work experience student from Portsmouth College. Wanting to pursue a career in trauma-related psychology, she took a keen interest in the work in veterans’ mental health and the impact of social therapy on recovery and decided to volunteer at our monthly drop-In.  Having moved to university in Southampton to pursue her degree in Psychology, Saffron continues to return to Portsmouth to volunteer for us. Saffron carries out one of the most important tasks at Drop-In, coordinating and managing all of the appointments to ensure that every veteran sees the service that they require, balancing the various needs of the delivery partners, veterans and volunteers. Saffron also helps out at VOS office, updating our client database, collating feedback forms and many other general administrative tasks.  Without her flexible contribution, many of our routine tasks would fall behind. Albie Mullings – Pompey In The Community

Albie is 14 years old and has been participating weekly kicks football sessions at Bransbury Park for 6 years. In 2017, Albie was asked to become a volunteer because of his commitment to being a positive role model for his peers and the younger participants. Within the past year Albie supported the team in boxing, table tennis, youth club, rugby, football, cricket daily and has also given up his time at weekends to support the teams at tournaments and helped staff promote local events such as Fratton Family Festival. Albie helps with a disability sports programme and promotes local sessions within his school, friends and on social media. In 2017, Albie was awarded Kicks Champion status for his efforts during the 2016/17 season. Caitlin is 10 years old, and so passionate about raising funds for the Royal British Legion Poppy Appeal – inspired by her Grandad. Last year Caitlin started collecting for the Poppy Appeal at every break time at school, raising £322.76. Caitlin has entered herself into 3 running events this year to raise more money, and is taking every opportunity to collect for the appeal. Caitlin is an inspiration to young people. 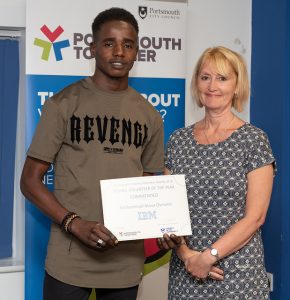 Mohammed volunteers for Red Cross mending and maintaining bikes every week. He found this work for himself as soon as his English was sufficient. He has been in the country for a year as an unaccompanied asylum seeker from Sudan, arriving in the UK at the age of 17. It is wonderful to see him wanting to give back to the community that he has only lived in for 6 months. 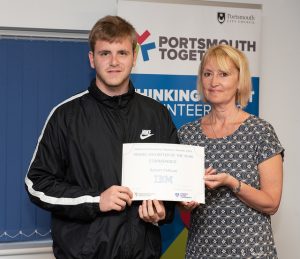 Robert is a 16 year old boy who gave up his birthday to help Baffins Pond Association when they were broken into.  No one who knew how to use the CCTV system was available.  Robert spent all day helping the police catch the people who did it. Robert also volunteers at Victory Hants, a football team for people with mental health issues.  Robert is always there whenever they need him; he will always drop what he is doing to help other people. Robert has overcome his own problems he has had in his life, as he is deaf, but doesn’t let that get him down or stop him helping people.