‘Portsmouth thanks its Volunteers

Home › News › ‘Portsmouth thanks its Volunteers

The Portsmouth Inspiring Volunteer Awards 2018, organised by Portsmouth Together and Pompey in the 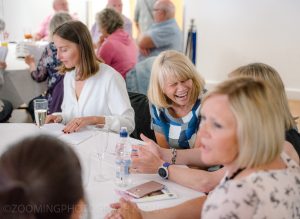 Community will take place on Thursday 7th June 2017 from 6.30-9pm at the Victory Suite, Fratton Park.

The Awards form part of the cities celebrations for ‘Volunteers Week’ (1st-7th June). National Volunteers Week highlights the enormous benefits that volunteers give to local communities.

The Awards – now in their fourth year, are a chance to celebrate volunteers, volunteering and the things which can be achieved working together to make Portsmouth the best city it can be.

This year has seen the highest ever number of nominations.  New award categories that have been added to open up the recognition to a much wider range of volunteering and social action that exists in the city.   The new awards include a ‘community business award’, for businesses who have been involved in a project or activity which has helped the community of Portsmouth.  A second new award is the ‘thinking differently award’ which will be awarded to a volunteer Involving organisation for an innovative programme that engages volunteers.

Sandy O’Neill, Chair of the Portsmouth Together Partnership:

“The Portsmouth Together Inspiring Volunteers Awards are a great opportunity to applaud the excellent work that volunteers from all walks of life do within the city.  Volunteering has many benefits both for the individual and the organisation involved, as well as being a great opportunity to learn new skills and meet new people.  The calibre of the nominations for this year’s awards demonstrate how strong volunteering is in our city and that’s something we want to celebrate.”

“We have again seen an increase the number of nominations by more than 30%, which is fantastic and shows that value people place on thanking volunteers.  We have also worked hard to increase the number of those nominated attending the celebration evening.  It is unfortunate that we do not have the space to invite everyone, but all those nominated will receive a certificate of thanks signed by the Lord Mayor of Portsmouth. ” 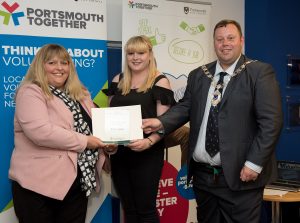 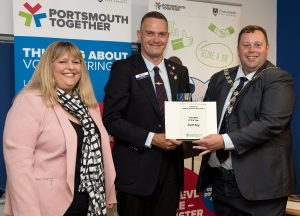